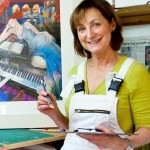 Angela’s work is imaginary, narrative art with a strong design element. Although her figures are stylised, good drawing and composition are something she is always striving to achieve in order to underpin her work with “rightness”. Her initial drawings are done on sheets of tracing paper so she can reposition objects and keep going back to her original sketches as she paints.

Her father encouraging her to go to art school, where she studied graphic design. After she graduated, she worked in London advertising agencies and design groups, incorporating illustration wherever she could. She established her own design company, D’Arcy & Brittain, working from a converted barn in Buckinghamshire, UK. She started to paint in watercolour in the 90’s and was included in the Sunday Times “Best of British Watercolour” competition. Encouraged by this success, she increased her painting output until she was able to switch to painting full-time.

Her paintings depict how our moods change if we interact in a non-verbal way with friends and animals or feel deeply about things. Compositions where everything is transitory and fluid and lines of connectivity run from one object to another are used for focus and drama. Her inspirations come from observation, songs and life in general, trying to focus on the positive and the good in the hope that her work adds a little warmth and joy. Her work is colourful and design-led and each painting year that passes, her work becomes progressively more abstract, trying to leave out detail but still conveying meanings and emotions. She now paints semi-abstract expressionist paintings in oils and acrylics from her Sussex studio in the UK.

As well as painting from her own inspiration, she has done many commissions to celebrate events in people’s lives and sold her paintings throughout the UK, USA & Italy. She has exhibited in Rome, Miami and London.

Angela was elected as a member of the Society of Women Artists in 2017.

She continues to run one-to-one workshops at her studio in West Sussex, UK and a one-week painting holiday from her studio in Abruzzo, Italy.